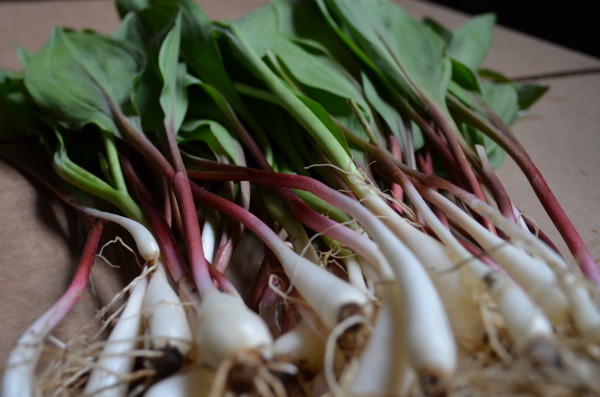 I was on tour in New England the first spring after moving to Wisconsin.  One day I got a call from my sweetheart at the time, outlining all the things I was missing back at the housing co-op as the season began bursting with life.  “The saddest thing, though,” she said, “is that you aren’t eating these ramps. Oh my god–they’d be your favorite thing ever.”  I didn’t get back before the season was over, but my first taste of wild leeks the next year proved her right–that complex, strong, garlicky-oniony flavor, with a hint of something lemony hiding underneath, floored me, and I ate them with almost every meal for the few weeks I could get them at the co-op.  It was an early sign of the horrible disorder of dedicated seasonal eating, which has doomed me to pleasures more severe than I ever could have imagined.

Since becoming a foraging nut (figuratively–I have a soft shell and only hang on trees for short periods–and also make stupider jokes), I’d found one dense little patch of wild Allium tricoccum, and had harvested it gently, thinning here and there.  In the middle of last spring’s heavy rains I took a walk in a forest new to me.  Countless glittering streamlets flowed over the high landscape, and my bare feet sank deep into mud and sand as I walked in calm wonder.  A half-mile into the woods I caught the scent, and started to spot, here and there, unmistakable pairs and trios of long, pointed leaves.  I held back the urge to harvest anything–these were very young plants, in small clusters–but before too long I followed a line of them off the trail, and into a vast grove of wild leeks, thriving on the wet soil.  I waited another couple of wild weeks before I returned.

In the interim, I’d become more acutely aware of the aggressive overharvesting of ramps by foragers catering to a restaurant industry in which wild foods have become increasingly sexy.  Backhoes, I was told, were uprooting entire colonies of wild leeks, so that entrepreneurs could supply chefs who could put ramps on their menus, the dollar value of this increasingly threatened plant increasing with each stage of the process.

I don’t, by the way, necessarily have anything against foraging in order to sell the surplus to restaurants and grocery stores.  Though I personally value the degree of detachment from the market economy that gathering can provide, I see innumerable ways in which the introduction of wild edibles to our food industry could potentially alter the ecological consciousness of eaters.  If foragers and chefs around cities with blossoming food scenes banded together, fueled by a shared sense of historical mission, they could use wild food as an encouragement for people to become more self-sufficient and more critical, not only in relation to the food system, but about our forms of life and the ways they do or don’t involve a rich, invested, multifaceted relation to nonhuman nature.

I wondered if indigenous people had tended this spot.  So many places we assume are “wild” turn out to be the result of careful interaction between humans and other life.  Our (scary) ability to affect nearly all other living & nonliving things is balanced by a singular ability to reflect on the relations in which we’re enmeshed.  Those relations can form the basic material of composed interdependences that help us provide for our needs.  From “the environment’s” point of view, we’re not more or less intrinsically important a factor than anything else.  Regular management of savannas by controlled fire doesn’t set us apart from grazing by buffalo, pollination by native bees, or regulation of nutrients among forest trees by networks of fungal mycelia.  We are creatures who push our “environment” — everything that affects us, but whose membranes are distinct from ours — in directions that benefit us, and who, at our smartest, can see that we derive the most benefit from “environments” that benefit from our actions.  The more mutuality the better.

Though I felt confident that my spots weren’t being harvested by anyone else, and I knew I could sustainably dig some bulbs, I decided only to harvest greens that season.  I took one leaf and stem from every third plant in the denser patches.  I moved slowly and quietly, trying to pay attention to the dips and rises of the land, to learn more about where the plants seemed to be thriving the most.  I did dig a small bag’s worth of bulbs and roots, and I transplanted them to spots where (without much rigorous study, and without even a basic level of gardening experience) I thought they might reproduce and thrive.  In my clumsy way, I tried to engage in something of the kind of management so well-practiced by our hunter-gatherer forbears.

Even that gentle harvest sent me home with many gallons of ramp greens, which we ate daily for the next few weeks, raw in salads or sprinkled over fish, briefly sauteed with eggs, blended in soups with nettles.  We preserved a lot: chopped finely and mixed with butter (we rub chickens with that prior to roasting, or spread it on bread), fermented (lacto-fermentation brings out some of the subtler flavors in the stems and bulbs; I also added a lot of greens to a big batch of kimchi), dehydrated (to sprinkle over stir-fries or into soups) or blended into pesto with other wild greens. In January, we’ve still barely made a dent in the supply we put up in May.

If you’re walking in the woods in early-to-mid spring, especially in an area where streams or rivers often flood, and especially among a mix of still-leafless sugar maples with other hardwoods, keep your eyes peeled and nostrils open.  Look for the pairs or trios of lance-shaped, flat green leaves between 8 and 12 inches or so; though they’re a member of the Allium genus (along with garlic, onions, chives and cultivated leeks), they look more like lilies than garlic or onions.  The base of the leaf, where it tapers to a stem, is often a beautiful purple color; the lower stem and small bulb are white, often with a purple exterior layer.

For sustainable harvest, take only greens, don’t defoliate any plants completely, and don’t thin any patch out too much.  You can also dig around the base of the plant and snap or cut the bulb above the root stock, leaving the roots in the ground to sprout a new shoot.  Bulbs get larger after the leaves die back, so–if you know where the plant was growing–you can also harvest them later in the year, which is especially good if some plants have flowered and gone to seed; that way you’re replanting the leeks as you harvest.

You can use wild leeks as a wonderful addition to countless dishes, in the ways you’d employ other alliums, but with the added advantages of leafy greens.  They’re also a great main ingredient, and were used that way often by indigenous people.  I like them raw or just-barely sauteed, but you can cook them longer if you want a milder flavor.  I can’t think of a better spring meal than wild leeks with morels, a brook trout, and a watercress-based salad on the side.  The greens don’t keep for long (and bruise very easily), so use them soon after gathering or purchasing.

Ramps are highly nutritious, with significantly more vitamin C than oranges and a host of other vitamins and minerals, including K, B6, and sulfur.  Like garlic, they seem to have potent antimicrobial properties, especially in the crushed bulb.  Wild leeks basically have the nutritional bang of greens and garlic, with a flavor profile that goes beyond either.

What a beautiful thing it is to get out into the woods for the first greens of the year, and to cleanse the body and awaken the palate with one of the most versatile foods around.