The year of rains: it was a rough one for so many.  Streets and houses flooded in cities and towns.  Topsoil and ravine banks washed away, farmland flooded.  In the middle of it all, there was incredible abundance for this walker and forager.  In magical places new and familiar, I got to know more plants, tended to special spaces, found a quiet mind and easy breath as I moved slowly through landscapes, in tune with some fundamental aspects of being a human animal.  Coming home, I collaborated on inventing ways of cooking with wild foods I’d previously used in the most basic ways.  Friends and family joined in.  There was never enough time to learn, gather, process and prepare, and each time was always enough time.

I remember wading, in the spring, barefoot among hundreds of knee-deep new rivulets, linking the glittering streams that flowed down through a remote natural area I hadn’t visited before.  Happily pulling my legs again and again from deep sandy mud, noticing more and more wild leeks on the side of the trail, until they led me to a massive grove, to which I returned a couple of weeks later to sparingly gather their greens, in a gentle harvest that still gave us enough dried plants, ferments and ramp butter to last through this winter.

Around the same time we had the best morel harvest I’ve seen since moving to Wisconsin, going out in the pouring rain to let those mushrooms encounter us, seemingly peeking out into patches of light among the undergrowth.

It was the beginning of a great year for fungi.  In early summer, nine-year-old Yevka and I went to hunt chanterelles, and came home with the first eighty or so of hundreds gathered this year.  Yev insisted that we sit down with our field guides to identify every mushroom we saw–something I rarely give myself time to do–and we learned a lot, spending four hours in one sizable clearing.

Later, in another natural area unknown to me until then, I walked a steep hillside among tall old trees, hoping to find ganoderma tsugae, the hemlock reishi.  After checking every likely trunk and stump for an hour, I decided it was time to give up, hike back down the stream bed, and head home.  Standing by the water, I looked down and saw one shining little mushroom protruding from the base of a tree.  Of course.  As always, it seemed like the decision to stop looking invited something to appear.  I didn’t harvest that lone mushroom–but, when I looked up, I saw a downed log across the stream, covered with flat, round protrusions.  I crossed over and, brushing the thick chocolate-brown spores away, saw the lacquered red surface of the fungus I’d been seeking.  Hundreds of reishi on countless logs and trees led me back to the trail to my car as I filled bags with as many as I could carry–just a few caps out of fifty here, a few out of eighty there.  I stopped many times to kneel in gratitude.

There was hardly time to gather the quantities of berries we seemed to find every time we turned around.  So many black caps all over Southern Wisconsin!  I also found many, many serviceberry trees I hadn’t encountered before.  Serviceberry was one of the gateway plants for my growing obsession with identification and harvest, when I was just starting this journey in a serious way a few years ago; the deep sense of ease and release I felt one summer day when I looked up from my picking at the perfect sky has stuck with me, so the joy of coming across more is a special one for me.  Some were planted alongside a major grocery store, and, in the wake of heavy rains that somehow left the ripe berries intact on the trees, we harvested as many as we could from them, despite being chased away more than once by a zealous cart-mover.  I found others, the first wild specimens for me, in the woods at the Pictured Rocks National Lakeshore with my parents and sister, and they were the most delicious I’ve tasted.  That U.P trip was also my first visit as a forager to chokecherry country, and it felt like a heaven of abundance to fill my bags and buckets.  Not to mention the hours spent destemming and juicing wild grapes and elderberries with Nora, the kids, and Uncle Fred.

I could go on and on, and will.  Learning more herbs and wild greens (oh, noble poke shoot).  Digging roots with the kids at Wild Harvest Nature Connection.  Finding out that I’m one of the people whose gut doesn’t like daylilly.  Feeling supercharged by Sam Thayer’s new book, with its manifestoes for foragers as tenders of the land and ecological revolutionaries.  The realization that volunteers spray glyphosate on garlic mustard in remote places.  The desire to do something about the poison employed in our cities, parks and forests.

In the late spring, What Got Gathered began.  I thought it was time to share the fermented hot sauces I’d been making, and to build wild food into the process.  Nora and I launched the business with a dinner in June, cooking for 30 backyard guests in Meg & Adam’s little kitchen.  Max stepped in as guest chef and all-around helper, and he and Nora each made a dessert that literally brought tears to my eyes.  What a blast–and what a lot of work–to invent a foraging-centered menu for that meal, and for the brunch that followed in October.  In between, baby Miksa was born, in the middle of the great storms, under a full moon, changing just about everything, and making me long even more for a life closer to that of our hunter-gatherer forbears.  We can’t wait to walk with him through prairies and woodlands, stream beds and marshes, gathering in wonder. 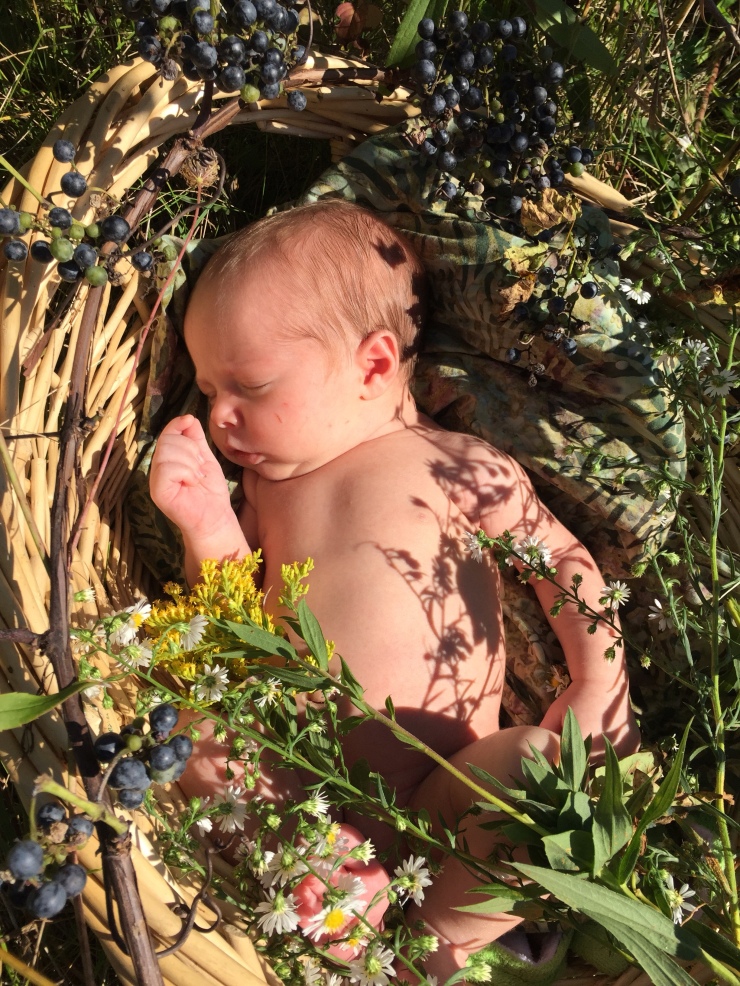 Having slowed down sauce production for the season, I’m hoping to write more (and more detailed and interesting) posts here over the next months.  Some will be essays.  Some will be brief descriptions of the wild plants and fungi we’ve been gathering.  I’ll start that off here by showing you the menus for our two meals, and adding an increasing number of links to posts describing the things we included.  I hope you enjoy poking around (and nettling about), and wish you a year of abundance (though maybe not such an abundance of falling water).

Chicken of the Woods mushroom 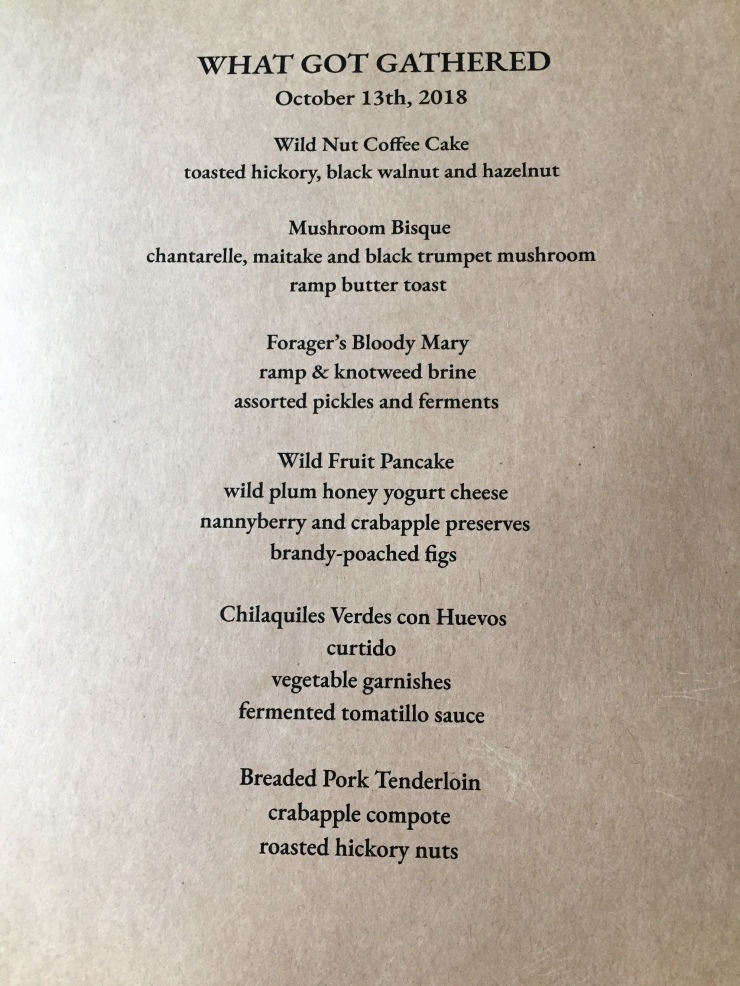